YoungBoy Never Broke Again brings his tour to Baltimore’s MECU Pavilion (formerly Pier Six Pavilion) on Saturday, September 15. The show, dubbed the End of Summer Jam, features the rapper, singer and songwriter (who was formerly known as NBA YoungBoy), along with other surprise acts. YoungBoy Never Broke Again is best known for the song “Outside Today,” which peaked at #31 on the Billboard Hot 100 chart. The Louisiana native will celebrate his 19th birthday next month; those years have been a roller coaster of ups and downs.

On the musical front, YoungBoy (whose given name is Kentrell Gaulden) had success starting at a young age. He began producing music when he was just 14 and he released his first mixtape, Life Before Fame, in 2014. His July 2017 mixtape, AI YoungBoy, charted at #24 on the Billboard 200 and his July 2017 video for “41” included cameos from several artists, including Meek Mill and 21 Savage. 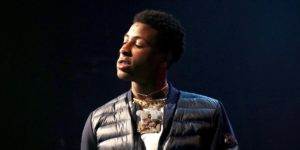 While YoungBoy has experienced many career highlights, despite his young age, his personal life has been fraught with issues.

With a father in prison, the rapper was raised by his maternal grandmother, who passed away several years ago. He also dropped out of high school and was arrested for robbery as a young teen; even after a stint in a juvenile detention center, YoungBoy continued his criminal behavior, reportedly as a way to pay for studio time.

In November 2016, YoungBoy was arrested before a concert in Austin, Texas; the charges were two counts of attempted murder related to a drive-by shooting in South Baton Roughe. He was in jail from December 2016 to August 2017, when a Louisiana judge sentenced him to a suspended 10-year prison term and three-years of active probation.

He was arrested again before a February 2018 concert in Tallahassee, Florida. This time, the charges were from Georgia, there was a warrant out for the rapper’s arrest for an alleged assault, weapons violations and kidnapping.

He was released from prison on bail in March of this year, but his legal battles are ongoing.

YoungBoy has a couple bright spots in his life beyond his career, though: he has three sons, Kayden, Taylin and Kamiri.

If you’re heading to the show, be sure to plan ahead to figure out the best spots to park and hang out before and after the concert.

Located at 55 Market Place in downtown Baltimore, Harbor Park Garage is an ideal spot to begin and end your evening. Easily accessible from 83 and other major roads in and out of the city, the garage is just a short walk to MECU Pavilion and close to many restaurants and bars, including Power Plant Live!

Plus, parking at the garage is reasonably priced, the garage is well-lit and securely staffed 24/7, and the employees are friendly, knowledgeable and available to answer any questions you might have.