As we settle down, following a fourth of July full of celebrations of the birth of the #Murica we all know and love, we’ve been alternately entertained and shocked by everything from the Clinton FBI probe outcome to the announcement that Kevin Durant will head to the Golden State Warriors. 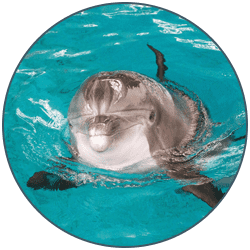 Closer to home, those in the Baltimore area have recently been treated to the news that’s less dramatic than #1776Trump or anything President Obama has to say – but it’s still worthy of fireworks. The National Aquarium in Baltimore announced that it will create a dolphin sanctuary – the first in North America – in an effort to care for and also study dolphins in a protected version of their natural habitat.

The sanctuary likely won’t be ready for about four more years – the process is a long one. During that time, the Aquarium is evaluating new uses for the dolphin’s current home on Pier 4.

So now is a great time to visit the dolphins in their Baltimore digs.

In addition to the dolphins, there are tons of events happening at the Aquarium all summer long. For instance, if you’re into the rainforest – and who isn’t? – be sure to make time for the Rain Forest Talk, which delves into the lives and purposes of specific rainforest animals, like the Madagascar hissing cockroach. Sounds scary, but the little guy actually serves an important purpose, as “nature’s recycler.” You’ll learn about that, and a lot more, during the talk.

It’s not all environmentally conscious bugs and swimming mammals at the harbor these days, either. Pier Six Pavilion has an excellent and diverse summer concert series underway – upcoming shows include FKA Twigs with Travis Scott, Young Thug and Young Jeezy and, for the deadheads among us, Dark Star Orchestra with special guests The Bridge.

Whether you’re Aquarium-bound or heading downtown for a show, Harbor Park Garage is the place to park. Reasonably priced and conveniently located at 55 Market Place), it’s a short walk to both the Aquarium and Pier Six.

If you have any questions about where you’re going, the helpful staff will point you in the right direction. So you won’t waste any time wandering and won’t miss a second with your favorite band – or favorite bug.