Which Evolved First: The Jelly or the Sponge?

Biologists and geneticists from Vanderbilt University and the University of Wisconsin-Madison partnered to investigate the evolutionary history of jellies and sponges, and found that jellies evolved before sponges. 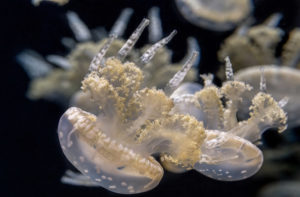 Previous research hinged upon biologists’ understanding of the tree of life—actually called the phylogenetic tree—that shows when different organisms evolved over time, and how closely they’re related to one another. According to the tree of life model, animals are related based on their physical features and placed in relation to fossil records to determine how they all fit together in the scope of time.
This research took a departure from this tree of life model to include the use of genetics research. DNA houses the root of all evolutionary changes, so by studying differences and similarities of the genetic makeup of jellies and sponges, these scientists were able to determine which truly evolved first. 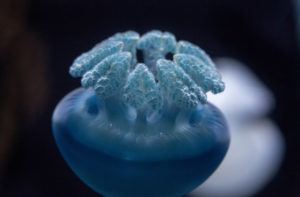 When examining the DNA of jellies and sponges, scientists determined there are one to two genes that set them apart. The analysis of these genes shows that jellies actually evolved first, even though they have more sophisticated digestive and nervous systems than sponges. The researchers determined that jellies are genetically closer to primitive, squishy tubes that formed and stuck to rocks.

Learn more about this research in the Nature Ecology & Evolution journal here!