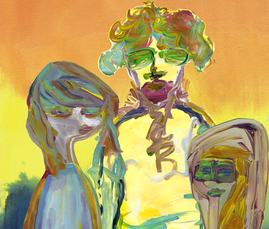 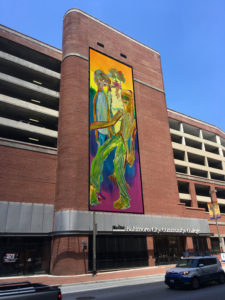 Downtown Baltimore got a surprise this April, with the reveal of a large format work of art affixed to the side of Harbor Park Garage, a parking garage located at 55 Market Place. The artwork, which is visible from the Jones Falls Expressway, is a custom piece by artist Edie Beaucage.

What is the art?

The piece is a 70-foot tall vinyl banner based on a series of paintings created and digitized by Beaucage. The banner is indicative of Beaucage’s signature style. It is vibrant, with broad, visible brushstrokes conveying action and energy, and light, bright colors.

Because it is on vinyl, the work is a lasting piece that stands up to weather. However, unlike a mural it is not intended to be a permanent installation. In the future, new works will replace this piece, turning the garage wall into a constantly evolving gallery space.

Who is the artist?

Edie Beaucage is a painter and mixed media artist living in Los Angeles, California. Beaucage, who was born in Quebec, Canada, has studied art in Canada, California and Florence, Italy. She has presented numerous solo exhibitions in the U.S. and abroad.

She has a Master of Fine Arts degree from Otis College of Art and Design, where she studied during the tenure of Samuel Hoi, who is now the President of Maryland Institute College of Art (MICA). When Beaucage graduated from Otis, Hoi purchased some of her work for his personal collection.

What does it mean?

When she developed the concept for the work, Beaucage was inspired by the idea of street performers in downtown Baltimore, during Light City and all year long.

“I was thinking of street performers and all the action happening at the Harbor,” she said. “The people in this work are musicians or they’re going out, social people with interesting personalities who are outgoing and fun.”

The characters included are “friendly, light and easygoing,” she said. Beaucage hopes their energy and positive attitude will add some lightness and brightness to the days of people who see the work as they travel downtown.

How was it made?

Beaucage typically creates works of art that are several feet high, but this is the first work she’s developed on this scale. At 70 feet high, the piece is even larger than the Sphinx in Egypt (that’s 66 feet tall). The characters’ feet alone are each the same height as a regular car.

After tinkering with large-format paintings, Beaucage realized the best way to approach the work was to scale it back. So, she went back to her normal process, putting paint to paper on a smaller scale, and she painted the characters individually.

“I couldn’t think of it as a 70-foot painting,” she said. “That was too big for my brain! So, I had to go back to what I normally do, working on paper.”

Once they were painted, she cut out the individual characters and scanned them into a computer. Once the images were digitized, she adjusted the sizes of the characters so they fit together visually.

The digital files were then sent to a printer that created the large-scale vinyl banner now hanging outside Harbor Park Garage.

What is it called?

The artwork doesn’t have a name – yet! Harbor Park is sponsoring a contest to name the piece. The author of the winning submission will be awarded a month of free parking.